I have been a Clinical Psychologist for more than 30 years.

I graduated in Psychology at Universidade Metodista, in São Bernardo do Campo, state of São Paulo. This city, at that time, was a great reference in Brazilian working class movement.

When in college, I came to know the ideas of the Psychoanalyst Wilhelm Reich. I´ve been very intrigued by this theorist, because of his way to see the human being in physical, politic and emotional senses. His name has never been put aside in my career.

Throughout my clinical practice, I´ve felt the need to broaden the way I understood the person that was there, at my office, to be consulted: the verbal language was not enough anymore. I could see the body expression, through breathing, gestures, muscle tone, posture. But then, I realized I was somehow in need of tools to improve body reading.

Getting to know neo-reichian schools

It took me a long way to get to Bioenergetics (Bioenergetics Analysis Institute of São Paulo). I went through an intense process of personal and professional experience, that eventually helped me to find out a better way to understand the human person. Since Bioenergetics is a neo-reichian school, I could find the theoretical basis for body reading and usage of exercises and techniques to which I could already relate.

Next step was to join another neo-reichian school: Biosynthesis (Brazilian Institute of Biosynthesis), that amplified my way to understand the human body, since this theory comprehends concepts that integrate embryonic layers since prenatal period, also dealing with bio spirituality.

Throughout my life, due to the fact that have been a victim of racism, I began to get involved in blackness issues (reaction movements aiming to give racial issues visibility, humanizing and respecting human body). That´s when I joined Instituto Amma Psique e Negritude (AMMA Psyche and Blackness Institute), which goal is to approach racism politically and psychically, providing theoretical and clinical practice, identifying, elaborating and deconstructing racism and its psychosocial effects.

Now I understand that through body exercise one can be freed from their emotions, which greatly helps to ease their psychic pain, as well as it rescues their vital energy. To be part of a non-governmental organization (NGO) allowed me to get to know political, educational and social action tools, in addition to get to know psychic racial suffering that can lead us to transforming the place we live in a better, fairer and more humanized society.

Access: "A Racial and Future Issue of Bioenergetics" - Lecture given at the 24th IIBA International Congress on Bioenergetics - Toronto - Canada - 24th to 28/05/2017. 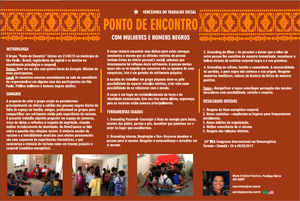